Driven by the fast-paced lifestyle of contemporary consumers, modern technology developers perpetually search for the next tech-savvy fad. Their electronic expeditions cause the empire of wireless communication and virtual networking to rapidly expand, making the exchange of information over cell phones, laptops, and tablets an almost effortless task. However, convenience swiftly turns to controversy as a new breed of thief takes to the internet in search of vulnerable prey. These crafty criminals employ an assortment of techniques to secure important information carelessly released to the world, even invading homes through webcams and cell phone cameras. As privacy becomes harder to obtain, many clutched consumers wonder what they can do to prevent such a breach of confidentiality. In response to this common concern, StickerTalk offers device owners a foolproof defense through our bestselling camera dots. Designed to be placed over webcams and smartphone cameras, these stickers render spiteful spies unable to compromise your privacy. A camera dot™ temporarily disables your camera’s functionality by blocking the lens, foiling any attempt by hackers to snap a pernicious picture. It is also removable, so you can remove the dot from your lens and place the same sticker on your device several times before it loses its adhesive qualities. While camera dots are extremely effective, they are also stylish and fun. We produce several shapes, sizes, patterns, and colors so there is a camera dot for every taste and every phone or webcam. When you order StickerTalk camera dots™, you not only receive a sheet of stickers, but peace of mind as well. 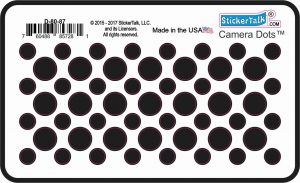