A Closer Look at a Texan Treasure

A Closer Look at a Texan Treasure

An island characterized by natural beauty and unique culture, Galveston, Texas, continues to attract countless curious adventurers to its picturesque shores. While this coastal city is mainly recognized for its plethora of tourist attractions, Galveston’s somewhat obscure history teems with intriguing accounts of bravery, loss, and heroism. In this edition of The StickerTalk, we would like to share a compilation of interesting facts and offer our readers fresh perspective regarding historic Galveston Island.

The island’s first inhabitants were the Karankawa Indians.

This tribe sustained themselves by fishing and hunting in the island’s shores and marshes. Galveston’s abundant natural resources allowed the Karankawas to thrive until the arrival of European explorers and settlers.

Galveston was instrumental in the Texas Revolution.

An ideal port city, Galveston’s harbor was home to the Texas Navy. The city also provided refuge to the fledgling Texan government; Galveston was considered the government’s “last point of retreat.”

The island played a pivotal role during the American Civil War.

The Union forces, attempting to weaken the rebellious Southern states, blockaded Galveston’s industrious port. Northern troops even occupied the island for a short period of time. However, the federal presence was forced from the city following the Battle of Galveston in 1863. The city served as a base for blockade runners throughout the conflict.

Galveston was nearly destroyed by the worst natural disaster in American history.

Leading up to the beginning of the twentieth century, Galveston Island earned the title of the wealthiest city in the sprawling state of Texas. It was the first Texan city to experience electric lights, the telephone, and baseball games. However, the island’s good fortune quickly faded on September 8, 1900. An unforeseen, yet massive, hurricane slammed into the barrier island, laying waste to large portions of the city and claiming the lives of at least 6,000 souls. The devastation was so horrific, it even arrested the attention of a past The StickerTalk subject, Clara Barton. Seventy-eight years old at the time of the hurricane, the then-president of the American Red Cross journeyed to an unrecognizable Galveston to personally lead recovery efforts.

You can still experience Galveston’s riveting past when you visit the island today.

The city contains multitudes of preserved historical treasures. From elegant Victorian houses to the brick streets of the Strand, Galveston’s incomparable story continues to be told by remnants of the island’s illustrious past. 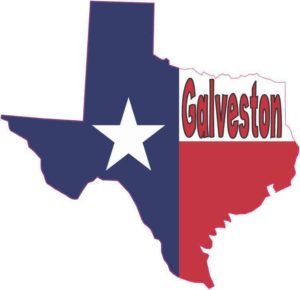 The information used in this blog was found at https://www.1900storm.com/redcross/ and https://tshaonline.org/handbook/online/articles/hdg01. Click on these hyperlinks to delve even deeper into Galveston’s history.