A Texan Take on a Timeless Treat

A Texan Take on a Timeless Treat

Every morning countless children and adults awake to the delicious delight of a warm, crispy waffle. Soaked with syrup, the waffle has enticed appetites since ancient epochs. Historians report that the first waffles were crafted by the Ancient Greeks. However, these waffles boasted a flavor that barely resembled the golden-brown goodness we now associate with waffles; instead, the Greek “waffle” was solemnly consumed during Christian Communion services. This breakfast staple continued to evolve over the ages. It eventually found its way to Europe and was introduced to America by colonists and settlers. History books often conclude the waffle’s journey at this point, but The StickerTalk respectfully disagrees with this rather unsatisfying denouement. As anyone who has ever darkened the door of a Texan hotel can testify, few culinary creations rival the unique thrill of a Texas-shaped waffle. Both houses and hotels in America’s second largest state house specialized waffle irons specially designed to produce a delectable dish that mimics the contour of Texas. A recess from the mundane, this unusual breakfast food arrests the attention of even the most discerning critic. Although no one seems to remember exactly who designed this iconic iron, both residents and visitors of the Lone Star State are glad the waffle got a Texan twist! 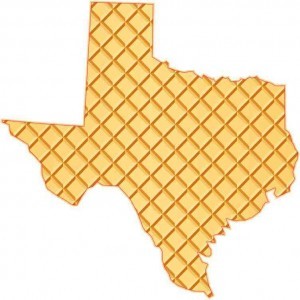 The information in this edition of The StickerTalk was pulled from http://time.com/3957420/waffles/. Click on this link to learn more about the waffle!