It’s the largest city on the European continent, so it comes as no surprise that Moscow, Russia, effortlessly attracts the attention of wandering wayfarers. Boasting a rich history and unique customs, Moscow’s far reaches shelter a plethora of secrets. In this edition of The StickerTalk, we invite you to delve into the endless enigma of Moscow, Russia, the capital city and crowning jewel of the largest country in the world.

Go With the Flow: Moscow was named in honor of the Moskva River. Sprawling over a distance of approximately 312 miles, the river serves as a critical source of water for the city as well as a number of neighboring communities.

A Banner of Courage: The city flag of Moscow, Russia, depicts Saint George astride a white horse slaying a serpentine dragon. According to oral tradition, this portrait serves as a metaphor for the eradication of paganism, partially due to the heroism of Saint George himself. Legend claims that the saint faced torture and eventual martyrdom at the hands of his pagan captors without renouncing his Christian faith.

The Curious Kremlin: Moscow’s colossal Kremlin easily takes the title of the world’s largest medieval-era fortress. This living piece of history continues to play an integral role in the Russian identity as it remains in use today. The far-reaching fortress contains four palaces and five cathedrals. The largest cannon in the world along with the world’s most massive bell additionally call the Kremlin home. 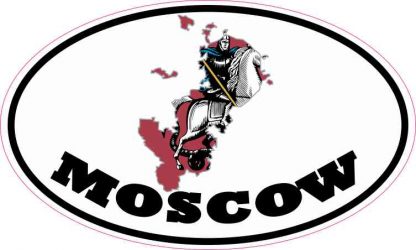