Boasting sweeping scenery, a diverse culture, and a vivid past, the city of San Francisco entertains an assorted array of tastes and curiosities. From the pristine waters of the San Francisco Bay to its endless blocks of historical architecture, San Francisco represents the epitome of all things American. Due to its complex identity, the city harbors a variety of surprises; in this edition of The StickerTalk, we will delve into the secrets of San Francisco, celebrating the city’s unique aspects and uncovering hidden stories of a bygone era.

Always on the Move: The streets of San Francisco play host to an incomparable historical spectacle. The city’s famous cable cars are the only National Historical Monument capable of movement. In fact, these products of antique engineering travel at an unchanging speed of 9.5 miles per hour.

The Orange Gate Bridge?: An example of chromatic confusion, the Golden Gate Bridge is actually painted International Orange. Although the original plans called for the bridge to sport black and yellow stripes, the chief architect fell in love with the bright red color of the sealant. 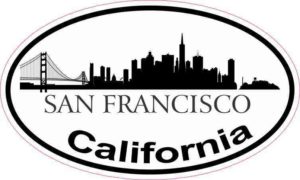